Better Than Nursing a Hangover

I know that Spring is a reasonable time to clean, to go through your closet and pack up all your cold-weather gear, unpacking the summery items like flip-flops and tank tops.  All I remember from this past Spring was that I was really busy and got very little done.  I kept meaning to do a bunch of household projects and snuck in a few here and there, but never a full scale attack on my to do list.  Granted, the shoulder/neck injury I was dealing with (lots of appointments between an ortho, chiro and physical therapist) made it impossible to do some of those things.

Earlier this week I hadn't been feeling too well, just run down and over the holidays, so I opted to stay in on New Year's Eve.  In years past, I would have regretted this decision.  This year, it led to me finally getting things checked off that damn list and to keep my original promise to myself about Pinterest:  only pin things that I might use and make sure to go back and use them or delete them every so often.

It was pretty fabulously productive for days I usually spend recovering from overindulging in drink.

I have kept journals all of my adult life and had done so through almost all of my teens.  I never thought of "keeping a diary" as a way to expunge my secrets, but there is some credence to the argument that people who get out their guilt on paper tend to be healthier.

The human brain is pretty fascinating.  It makes it possible for us to compartmentalize things that we are not yet able to handle.  It is like those thoughts and experiences go into cold storage.  When we're ready to deal with them, we know where they are.  The problem is avoidance and denial.  It's not that we can't deal with certain things, it's that we simply are not willing to.  We procrastinate on things that we think will be too painful, not realizing that bottling it all up is hurting us far more.

For many of us, writing resolves that problem.  It is a hell of a lot harder to admit your guilt over something out loud to another person than when you write it to yourself, for yourself, and have power over what happens to that piece of writing next.  There have been times when writing about a particularly painful incident helped me to understand that the only thing I could do was let it go and move on.  And those pieces of writing can get tossed, shredded or burnt to cinders immediately.  I never have to look at them again.

We all get hurt by the people we love and we don't always know what issues they have that contribute to their behavior towards us.  Writing about these things has helped me to understand something simple - that I don't understand why some people are the way they are.  That I may never understand that.  That I have no power over that.  Sometimes the only choices you have are to accept it, and love them unconditionally, or just walk away.  They aren't pretty options.  When you're dealing with relationships of any kind, things get complicated.  Being able to unravel some of that mystery on paper has helped me keep my sanity.

My point with all this is that being able to handle some of life's more interesting moments on my own has helped me to be not only a happier person, but a better friend.  I am far more capable of being a shoulder to cry on when I have dealt with my own crap.  And when I do lean on a friend, they no longer feel like that's all I ever do.  I suppose I've found balance.

All even-keel would be a boring way to lead a life and I am certainly made for rougher seas.  I think of writing every day in a journal as the best way to maintain my sea legs.
Posted by Jess at 10:00 AM No comments:

I honestly don't know where to start, so that's what I'm starting with.  Nothing prolific, quotable, inspirational - just hopping back in.

BlogHer's NaBloPoMo signup email for January went out this week and, although I still don't feel like writing or know what to say on here, I know I'll regret letting this go any longer.  No matter how much an artist loves their art, there are dry spells.  Successful bloggers work through them at all costs.  I admire that, very much, but this was never really a business enterprise.  As much as I love writing and I really enjoy blogging, I never aspired to be the next Pioneer Woman or get on staff at HuffPo.  While this keeps me from feeling like a complete and utter failure, I still don't want to let LostGirls fade away.

This started with me, but it was always meant to be a collaboration.  And despite having all these people in my life who would probably love to have their voice heard on here, I haven't been making the effort.  For god's sake, I haven't even asked.  So the lack of my writing isn't the only problem I have to solve.  I have to get other people involved again.  I hope Meg and Mary, possibly even Seth, will want to stay involved, but I really want other voices on here, too.  I have so many great conversations with people, especially people much younger than me, and I'd really like to share them with you.  Not the conversations - the people.  They have so much to say, but they're not necessarily going to sit down and create a blog to say it.  So I guess my New Year's resolution will be to motivate myself and others to be a part of this site again.

I hope you'll bear with me here - when you've had writer's block and you've allowed it to stay a while, there is a period of time when the new writing ain't that great.  Another resolution for me is to allow myself shorter pieces.  This isn't Tumblr, so I don't feel like we should only have short posts.  But I recognize that I need to mix it up a bit.  And that not every post has to have a picture.  If we manage to simplify without losing meaning, maybe we can get a post per day on here.

So here's to the short and sweet.  And to New Year's resolutions that we actually intend to keep.

While I admire subtlety and diplomacy in people, when possible, I view it more as trickery when it comes to a media publication.  What am I on about?  Well, I recently discovered a magazine (it will remain unnamed only because I have no intention of giving them free advertising) which I believe to be a bit deceptive.  And I find that deception downright creepy.

Darling: the popular form of address used in speaking to a member of the opposite sex whose name you cannot at the moment remember. - Oliver Herford


I may not ever decide to pick up a copy of, say, Garden and Gun, but I am glad to know quickly what they're about.  Then there are magazines like Lucky Peach - you may not know by the title that it's a foodie magazine written by some well-known chefs, but you don't need to look past the cover of any issue to understand its basic premise.

The first things that bothers me is the idea of creating a magazine that claims to be a lot of things, but buries a major part of its own agenda.  I do not know if the intention is to deceive, but when a magazine is created to target young women and nothing said or shown on the cover hints at one of its most basic aims...well, it feels a bit like luring people in under false pretenses.

Modesty: the gentle art of enhancing your charm by pretending not to be aware of it. - Oliver Herford


The discovery of this magazine, for me, comes at a time when I am first hearing all about the "anti-feminist movement."  Really disheartening.  Even disturbing.  And I'll be writing about that in a separate post - but I realize that I may be more sensitive to this type of possible deviousness put into print because I'm realizing just how many women think that feminism isn't necessary.  Or, worse, some sort of evil.

I fear a magazine that hides the agenda of bringing women back into an age when virtue and modesty were their most important attributes is likely to be poisonous to the generation of girls in this country who are now entering into womanhood.  I would prefer they learn Caitlin Moran's version of how to be a woman over someone else's idea of it being an art that one must  not only learn, but practice in order to be accepted/loved/whatnot.  I fear this.  I am actually frightened for this generation.

So if you're looking for a magazine to pass the time and you aren't interested in a feminist publication, let me start you out with a few recommendations:

Mental Floss will trick you into learning things by being hilarious and downright interesting.

Lucky Peach will broaden your understanding of food culture and the writing is excellent.

Psychology Today is another cerebral gem and not as fuddy-duddy as it might sound.

I have mixed feelings about the alternative women's magazine Bust, but not about editor Debbie Stoller (the creator of Stitch 'n Bitch).

And if you're looking for high fashion and exceptional interviews, the UK's Lula may be pricey, but is said to be well worth it.

Email ThisBlogThis!Share to TwitterShare to FacebookShare to Pinterest
Labels: feminism

"Fear him who has power to cast you into hell..."

These were the words that greeted the crowd prior to the start of this year's Seattle Pride on Sunday.  While this group of Christians did lead a non-violent protest (and I've certainly heard worse), can you imagine?

Imagine how disappointing it must have been to show up for an event that celebrates people being who they are, without shame...  Only to be told first thing that you should fear, you should be ashamed and, of course, that you're going to hell.  These are not peaceful words.  They are filled with fear and rage, anger and discontent.  There is not an ounce of tolerance therein.  And even whispered quietly, it is almost too loud to bear.

One of my friends cried during the parade, but it wasn't because of that first religious group.  It was when she saw the groups of Christians marching in the parade.  This was not only a show of tolerance -- she felt loved and was moved to tears.

The next time that someone turns up the volume on their hate, please remember that love can be hard to hear over all that negativity.  It is quiet and peaceful.  Gentle, but persistent.

Love is not loud.  But that does not make it less. 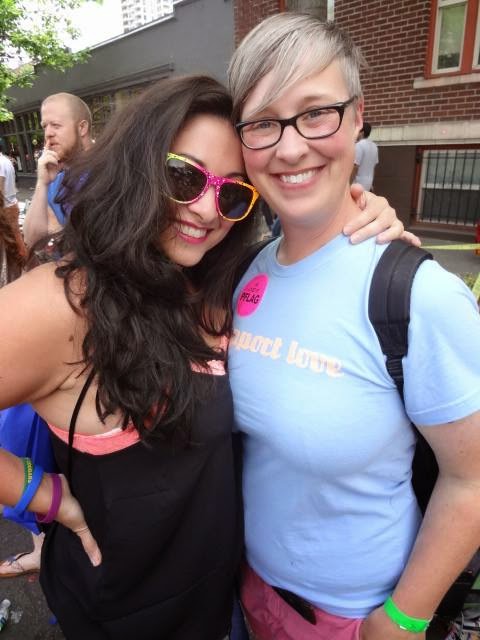 Special thanks to Jenn for inspiring me today.

Our Friends are Awesome